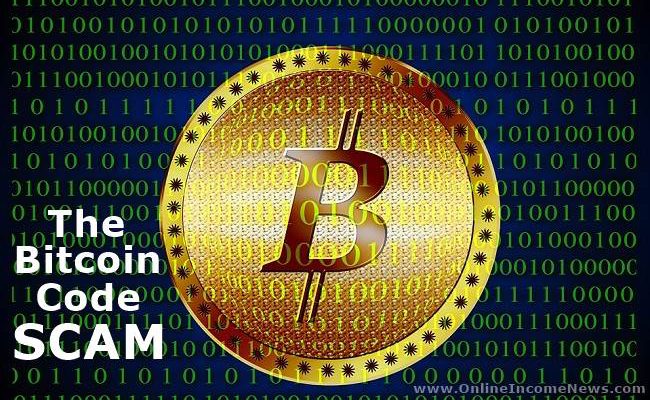 When it comes to hot niches right now, there’s no doubting the power of Bitcoin. Back in 2009, there were no exchanges for the cryptocurrency and, along with this, no interest to own it either. As we reached the summer of 2010, the price increased by 1000% over five days and reached a new high of $0.08 for one bitcoin. At this point, people started to latch onto the idea and a trend was starting to form.

In the coming years, Bitcoin exploded and, in recent weeks, the value has jumped from $6200 to just under $11,000. Considering the year started with Bitcoin at around $800, the growth has been incredible and a number of platforms have started offering their services as a result. Today, we’re going to be focusing on The Bitcoin Code and, as you can probably tell from the title we’ve chosen, we believe it’s one of the biggest scams around.

What Is The Bitcoin Code?

With the rapid rise in the value of Bitcoin, more people than ever are now interested in trading the cryptocurrency and this isn’t surprising. Essentially, The Bitcoin Code acts as a trading system earning thousands of dollars per day for their clients. Of course, the trading system doesn’t really exist and the platform is just looking for innocent people to dip their hands into their hard-earned money.

With platforms like this, normally users are sent through to a hidden section of the website. With The Bitcoin Code, you’re actually sent to untraceable (and unregulated!) brokers who pay the first website commission for each user sent through. After trying the website twice with fake email addresses, we were actually sent to two completely different brokers who are notorious for stealing the cash of their users.

With every good platform that promises to help you earn money, you need a leader. Typically, this is somebody who has experience in the market, who spotted an opportunity in the industry and made money themselves, and who now wants to pass on their expertise so you can do the same. With The Bitcoin Code, we have Steve McKay who has earned over $100 MILLION; as a result, he’s willing to hand out some free memberships for those who are looking to start in the niche. 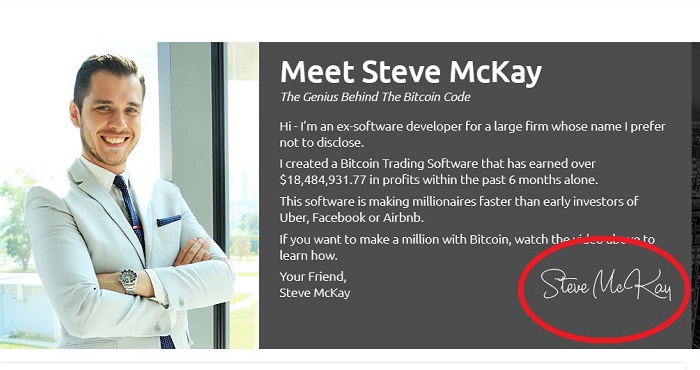 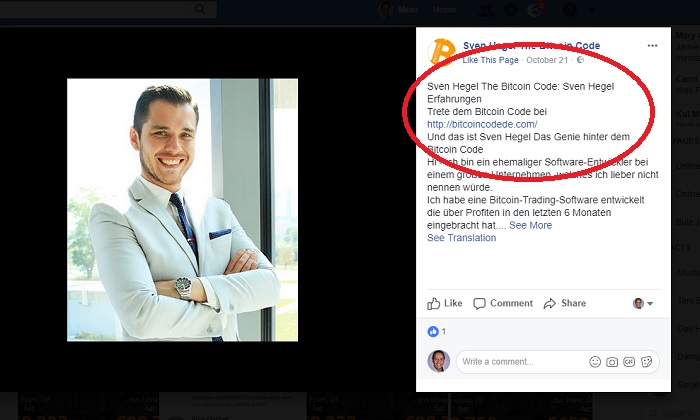 And here is – Steve Mckay as Stefan Holmquist 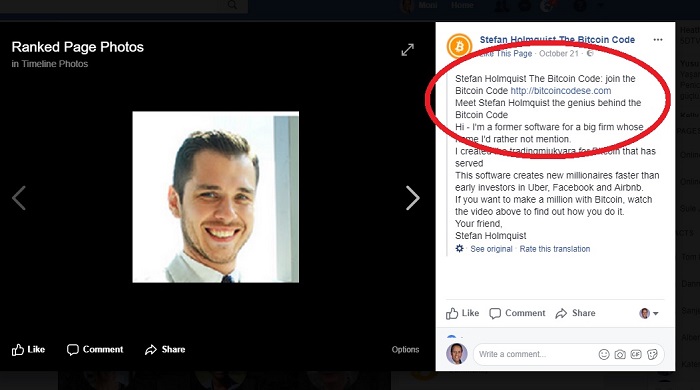 As it turns out, the image used in the emails,  on the website, and on various FaceBook pages is actually a stock image of a ‘handsome businessman working with laptop in office’. Unfortunately, the man has no link to Binary Options Trading and the image has simply been taken from a stock image website. With this, we don’t know whether the name is real or whether the founders have ever made money from Bitcoin.

Issues With The Bitcoin Code

With this in mind, how do we know The Bitcoin Code is a scam? Why should you be avoiding the website? 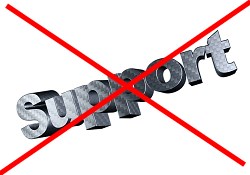 Firstly, none of the support links work and there’s no other web page to explore on The Bitcoin Code website other than the homepage. On this page, you’ll watch a fantastic video showing how previous customers have found success with the platform (more on this in a moment). Other than this, there’s very little information as to how the platform works and what you’ll receive after signing up. Of course, there’s a lovely little message from ‘Your Friend’ Steve McKay who is ‘making money faster than early investors of Airbnb, Uber, and Facebook’ (stock photo and all!).

From here, you’re expected to sign up and, as we’ve already seen, users are sent to a third-party website. Once you’ve signed up, your interaction with The Bitcoin Code comes to an end and you’re left working your way around the site of a random third-party. At this point, the Bitcoin Code has already got their money because they get paid just for sending you to the website.

Towards the bottom of the home page, you’ll find some links which provide access to a disclaimer, some terms, and a privacy statement. According to the six sections, we should also have access to a page for affiliates, support, and to report abuse; as you might expect, these links are broken. Well, to be correct, the report abuse link doesn’t lead anywhere while the creators of the website haven’t even bothered to add a link to the affiliate and support pages. Is it just a coincidence that a scam such as this provides no customer support features? We think not! 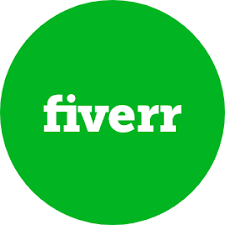 If you haven’t heard of Fiverr previously, it’s a fantastic task-based service where you can pay for professional work whether it’s writing, graphic design, or even business consultancy. Unfortunately, the website also offers actors and people who are willing to say whatever somebody pays them to say in front of a camera. Remember that fantastic sales video? Well, it just so happens these people are actors, can be hired on Fiverr, and probably don’t even know how they’re helping a huge scam.

Selling ‘believable’ testimonials, you could probably look on the Fiverr website now and find the same actors just waiting to be hired. Just in case you’re in any doubt, The Bitcoin Code even offers a disclaimer stating how the sales video is ‘fictitious and produced to portray the potential of the third-party websites’. What’s more, they openly state how actors have been used to explain the opportunity and that the video shouldn’t be taken at face value but rather as an entertainment piece. 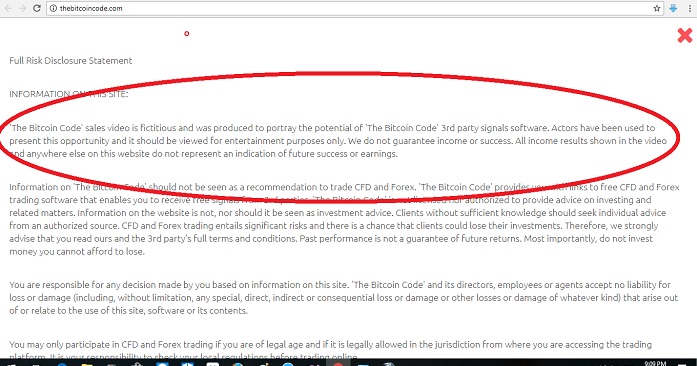 Although The Bitcoin Code hasn’t exactly gone to the effort to ensure their website is of the highest-quality, they have managed to get some fake reviews onto the internet so we urge you to be careful of these. Whether for money or a split of the profits, we aren’t sure but there are some review sites recommending this platform to their innocent audience and we think this is completely wrong.

Within these reviews, they tell their audience that a free ‘Bitcoin Code Tool’ will be available after entering personal details when this simply isn’t the case. Furthermore, they talk about Steve McKay as if they’ve spoken to the man personally when we know this isn’t true; the Steve McKay offered is, much like the actors, somebody who probably doesn’t even know how he’s contributing to the scam.

If you want to make money online this year, we admire your passion and your drive because it really is an option now for whoever has the determination to make it happen. However, you only need to read a handful of real reviews of people who have used the site to realize that it’s a scam. With this in mind, we’d much rather see you have a real shot at success with a legitimate program.

A disgrace to the industry and shameless in the way it operates, The Bitcoin Code is clearly a scam and we recommend checking out some of our other reviews to find a more suitable solution for your money-making needs. Even within the Bitcoin world, there are much better options than this one!

In our opinion, this is a total

I hope you enjoyed this post and if you have any questions about The Bitcoin Code or want to leave your own personal experience, leave a comment below.

13 Comments on “The Bitcoin Code Scam”